A month ago in Sofia kennel “Dalmazhik” they were born in the last second 10 years real dalmatian dogs - mother Brenda, daughter of one of the most beautiful representatives of the breed in the world - Goldie. This prompted Cvetelina Dimcheva - coach of Bulgarian club said dalmatian difference between the real dalmatian dogs points. 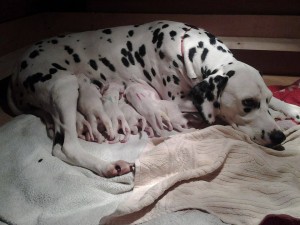 TK: Walking the streets, one gets the impression, dalamatinat that is one of the- common species, and you claim, it is not so?

TS.D.: As if, the majority of people, who want to grow dog not think the existence of this wonderful breed and to pursue its ubiquitous "modern" breeds. Meanwhile, appearing in public, Dalmatian causes tremendous admiration with his dignified presence and almost unreal appearance and obsessive radiation.

The first "wave Dalmatia", swept the country, was before 25 year, and second "tsunami", generated by the gaming version of the movie "101 Dalmatians", passed before 15 year. Result due to indiscriminate breeding - degenerate, unhealthy and isterichni dog. This has created, tragically, negative image of the breed. The Dalmatian dog is easy to grow, but hard for breeding. Breeding Dalmatians subject to strict rules, which must be strictly adhered to, to not give birth the insults.

C,D.: The first appearance of the camp Dalmatians us back in 1978 g. is marked with a false start - a cross between a dalmatian and chamomile followed by consanguinity between descendants occasionally included in the scheme and pointer accidentally appeared Dalmatians, shape the vision of dogs, distributed as "Dalmatians" in the past 20-ish years of the last century in our. These are the "dogs of".

Although sporadic, their descendants are born and now. Can be found in each site of the "HoReMag", asking key phrases in the search engines' dalmatinche buy "or" sell dalmatinche ".

All canine babies they are small and cute and looks even resemble Dalmatians. The price range of 150 to 250 lev. tempting… and limited to things here. Unknown breed and health status, both of their parents, and themselves puppies. They have no pedigree, chistoporodnost guarantees healthy and well. Often have anatomical defects and breed, inherited from parents. No studies, proving, their suitability for procreation. Due to the unknown origin, they are carriers of hereditary and genetic diseases, which is "unlocked" in a later stage of development. Carry the genes of other species. Variations in the nature and the psyche as the imbalance, ungovernability and causeless aggression towards people, are typical been selected dogs.

Usually see them sell quickly, once a month age, for no additional cost. The result is - disappointed new owners, left the veterinary doctors sums, tenfold excess of the purchase price of such dog.

TK: For what purpose was created Bulgarian dalmatian club?

TS.D.: To save and preserve the breed dalmatian pure in Bulgaria, group of enthusiastic owners imported from different countries register court in dalmatian 1997 g. druzhestvo s non-economic order "` Dalmatian Club-elit` " (later renamed to "Bulgarian Dalmatian Club"). Originally associated with such clubs from the Balkan countries and began an intensive exchange of information. After 2000 g. club members to establish contact with dalmatian clubs across Europe and with reputable breeders. At their own expense attending various exhibitions for dogs – Exhibitions for Dalmatians, European and world championships. Planning and buying puppies from Europe's most prestigious kennels. These dogs are specially selected - the condition is first choice, ie. the highest quality! Not mourn funds in the name of the breed. Imported dalmatincheta are direct descendants of European and world champions. This creates a new tribal core dalmatian breed in Bulgaria with exceptional quality representatives of the breed.

Released in 2001 g. book "Dalmatian - all breed" by Bulgarian author, is a valuable assistant to the lovers of these exceptional dogs. Club members adopt and implement the standards of the European Association of breed clubs (ECDC) rearing and breeding of the breed. Imported into apparatus for testing hearing, introduced compulsory testing for hearing and lack of hip dysplasia in parental pairs. Held exhibitions for Dalmatians, which experts are invited specialists breed, recognized worldwide, to assess each dog club as a potential parent. Set of Dalmatian, Bulgarian born in kennels already expressed their successful International Exhibition rings. Traces the dynamics of the development of different bloodlines of the breed in the world, because, as mentioned in the beginning, breeding Dalmatian is a very complex process and lay a scientific basis. As a result of many years of serious work of Bulgarian Dalmatian Club and the joint efforts of Bulgarian kennels - dalmatinatDivalinorCountofGold (our parvomaetsGoldi - editor's note.), bred and born in Bulgaria , became world champion in 2013 year.

TK: Then it is useful to know how to distinguish "dog of" a real dalmatian?

In the case of, failure to comply with even one of the ten conditions, listed above, need to be sure, that offer "dog of", not Dalmatian. In such a case,, more humane gesture is adoption of a dog from a shelter, instead of supporting self-styled entrepreneurs, offering "puppies of". KENNEL value of one and the other is equivalent, but the first version will come almost for free.

The documents are evidence of the truth of this, proposing, so that every owner of a legitimate kennel is required to provide the above-mentioned documents, signed by persons authorized and guaranteed by the respective canine organizations.

TK: How can we inform, If you are interested?

TS.D.:Bulgarian club has a dalmatian site , Blog, web portal and profile on Facebook, so that in the interest, you can always get advice and knowledge from professionals on issues, associated with dog breed dalmatian, not only in Bulgaria, but also outside the country.

Currently, the club presents the only grandchildren of World Champion 2013 year, Born in Bulgaria. 8-these puppies are produced in Sofia kennel "Dalmagic" by all the rules and requirements of the Rules of breeding and selection. Following a hardware test to check hearing, will expect responsible and caring lovers of the breed, willing to share some of my life with these unique creatures and experience the joy of communicating with dalmatian.